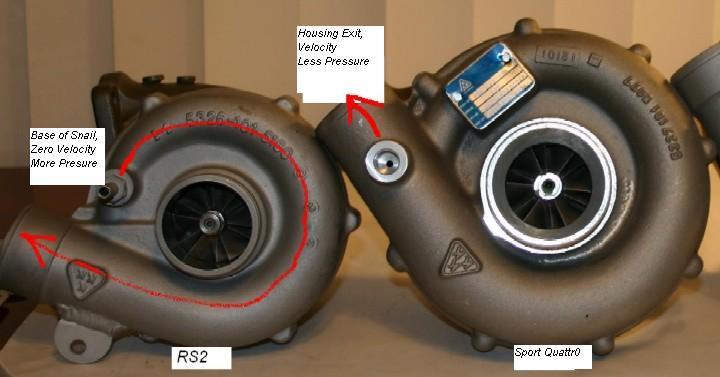 I've discussed this with a few people including some MEs who conclude that the highest point of pressure is immediatly under the compressor wheel. Bernoulli's equation validates that since the compressor wheel is doing the work and imparting all the energy into the air. From that point to the TB there are friction losses and a drop in pressure. The pressurized air expands into the scroll equally and since the volume at the start of the scroll is less, the pressure builds there first. Hence that is best place to tap for pressure and its where its located on the RS2. The pressure gradient develops in the scroll and that causes air movement to areas of less pressure (towards the TB). So.. .YES. IMO if the tap on the K27 is closer to the turbo exit then there will be less pressure there than the RS2. I know RS2s and they tap right at the smallest point of the snail. Most K27s I've seen tap closer to the exit of the scroll.

IF the turbo is making 24 psi at the intake manifold, then the air pressure directly under the turbine blades will be higher according to Bernoulli's equation. So the location of the tap on the turbine housing does matter. That is why.. when I tapped the T04?50 that I sold to 10Vturbo, I tapped it in the exact same spot in an effort to get similar WGFV performance.

The ECU reads pressure at the Intake manifold. The WGFV gets its driving pressure from the "boost only" pressure tap pre-TB. IF you move this point of pressure, then it changes the behaviour of your WGFV which means you have to tweak the spring in the wastegate.

The RS2 on the left of the picture taps near the start of the snail. The K27 Sport Quattro taps near the scroll exit. The boost pressure will be very different at these two locations. It has to be because air flows out of the turbo. Moving air means less pressure. Air velocity is zero at the base of the snail, hence the pressure is higher.