Here is a page showing some pictures of Bruno Kreibich and his cars.  He's had 3 Audi quattros over the years which have undergone various stages of upgrades and repairs.  He's sold his cars and they're currently owned by Shokan, Sprongls and myself.

1984 Toyota Olympus Rally.  Bruno Kreibich and Clark Bond.   This is Bruno's first year in the quattro after driving Porche 911s.  This is a solid Group 4 car at this point.  Wide front grill.  Aluminum narrow fenders.  Rear oil cooler.  Note the color scheme with the distinctive white B pillar.  The Triangle vent window.  Nets on the windows which is an SCCA requirement.  The chasis is fully prepped with two jacking holes in the frame just fore and aft of the wheel arches.  Bruno is standing next to the lady behind the door.  Mr Bond is walking around back of the car.   Notice that the CB radio wire is not run through the roof of the car!  Bruno probably didn't want to drill a hole in the roof of his brand new machine.   Is this the car handed down from Audisport?  The ex-Mouton car.  Buffum's first Audi a few seasons earlier was definately Pierburg.  This one is likely Bosch EFI on a 10V.  It is a generation old because at this time Audi was running full A2 spec Group B cars in Europe and starting on the 20V machines.  This car could possibly be a full Group4 spec machine right down to the Pierburg.   It does have the tall wing which makes me things its Bosch EFI on a 10V. 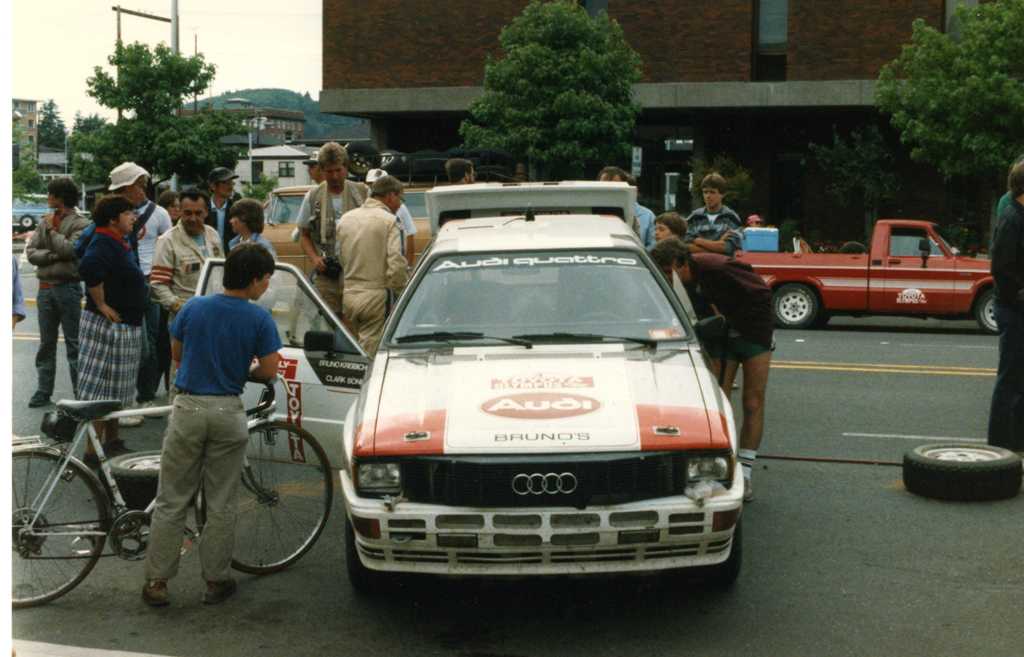 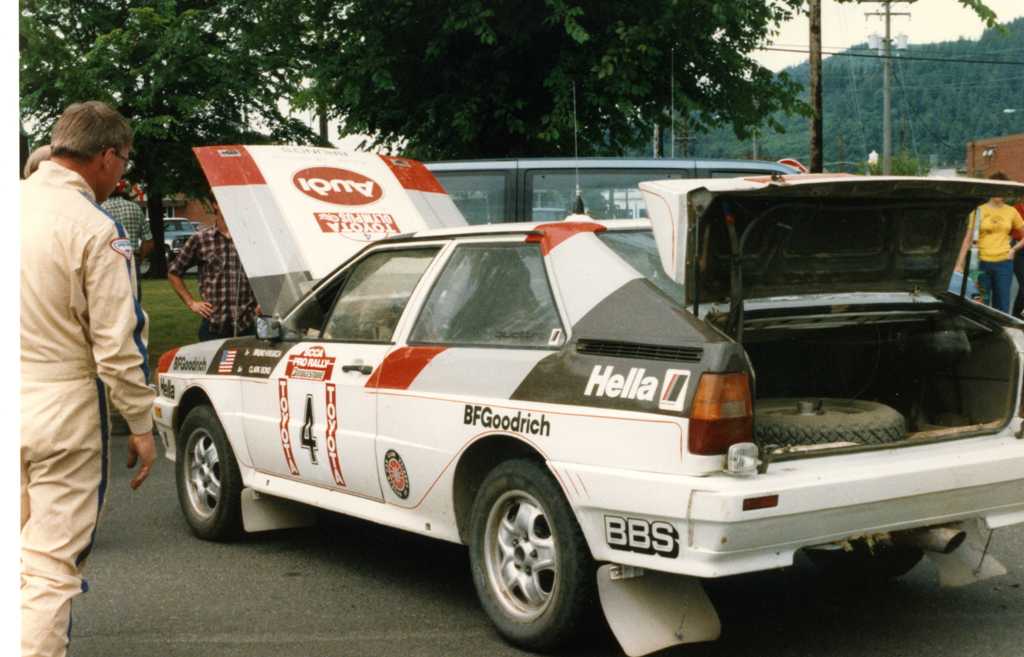 Nobody will ever say that Bruno was easy on his cars. 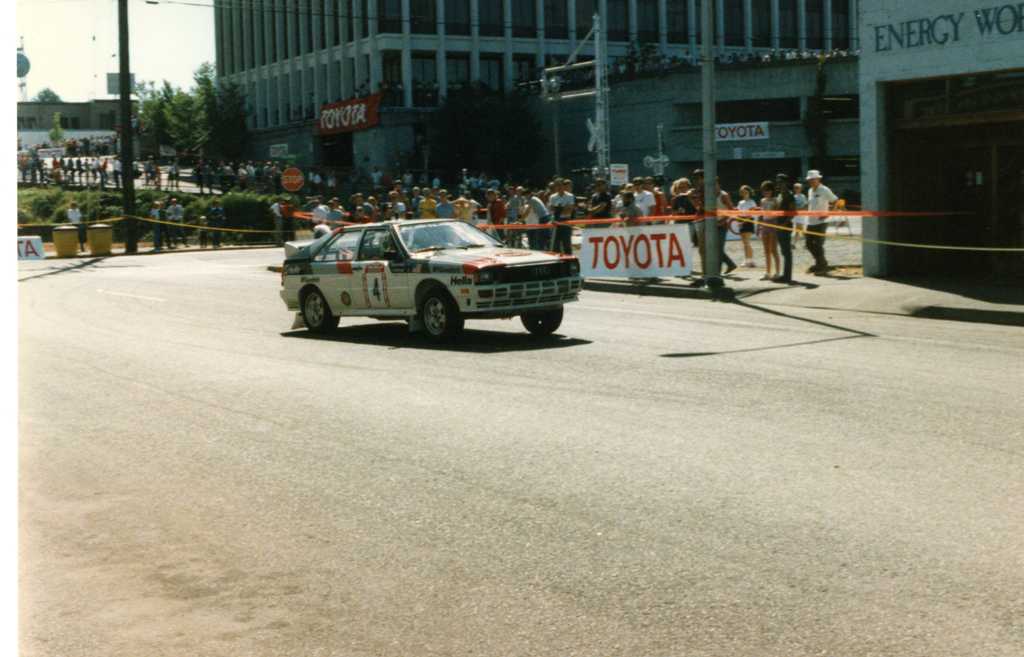 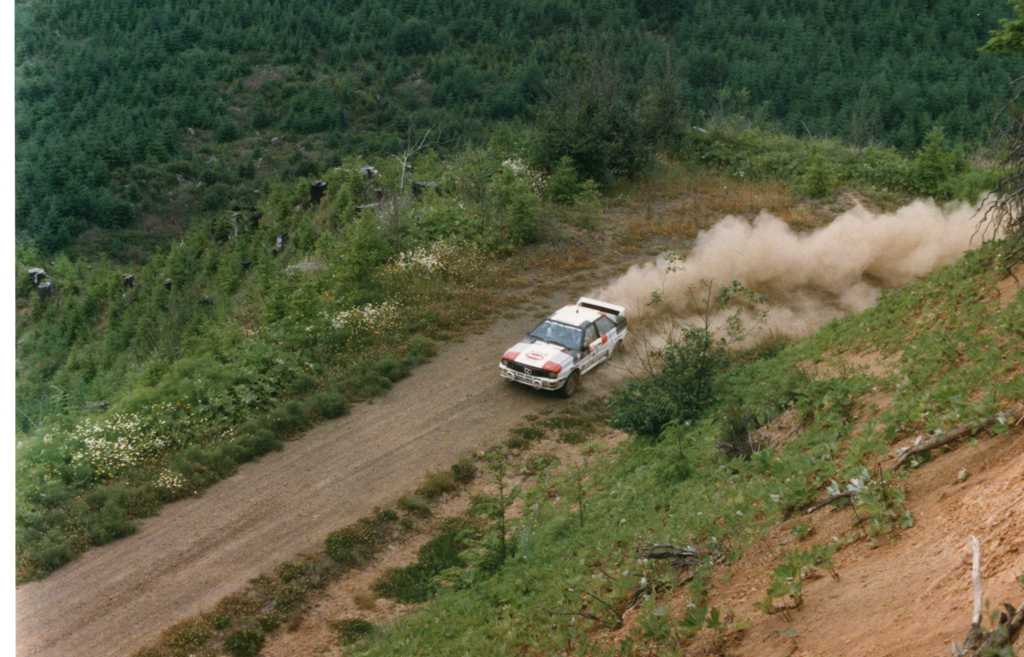 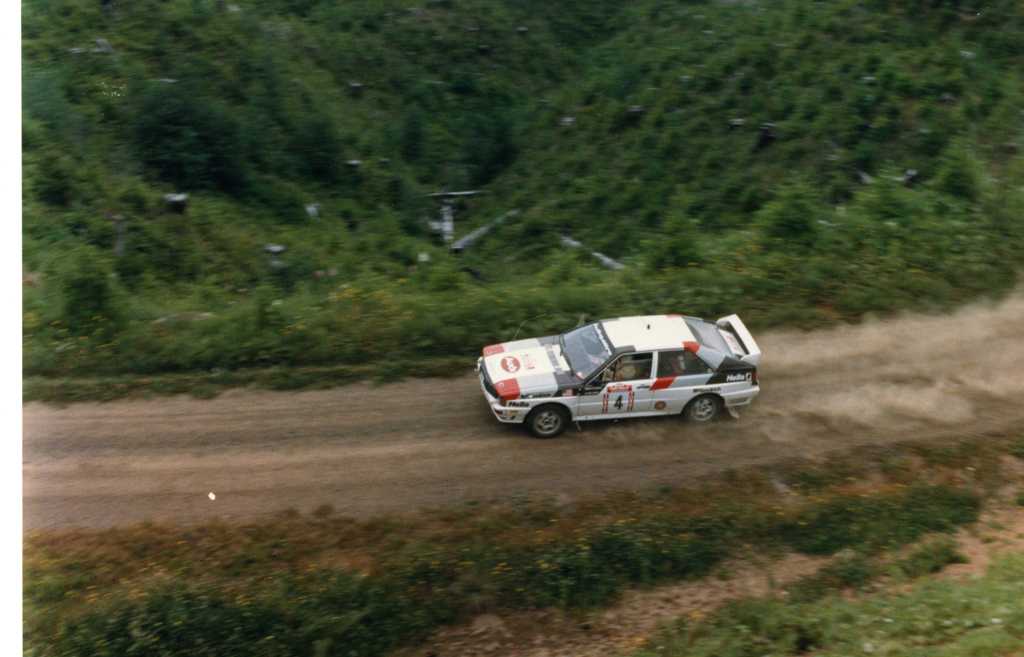 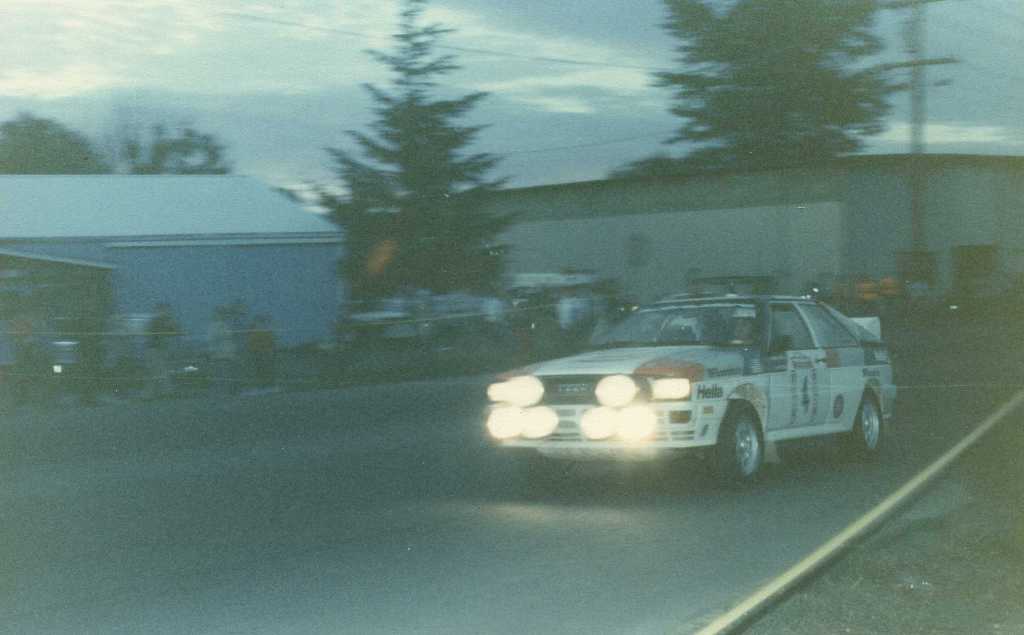 This car has A2 fenders. Bruno at the wheel in #18.  Notice the white door trim.  The triangle windows keeping the interior cool.  The hood pins have reinforcing plates riveted to the aluminum.  This car also has the red pinstriping as well as the abundant holes cut in the kevlar skid plate.   If it wasn't for the A2 fenders I would say that is my car, but I know it isn't.  Its likely the 20V now in the Sprongl's possession. 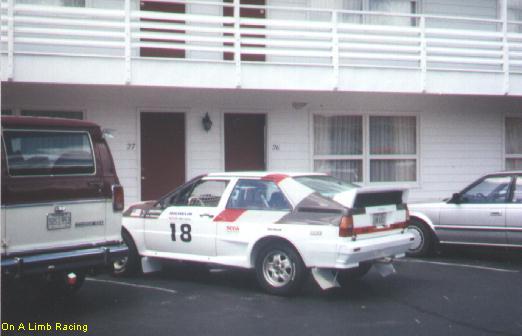 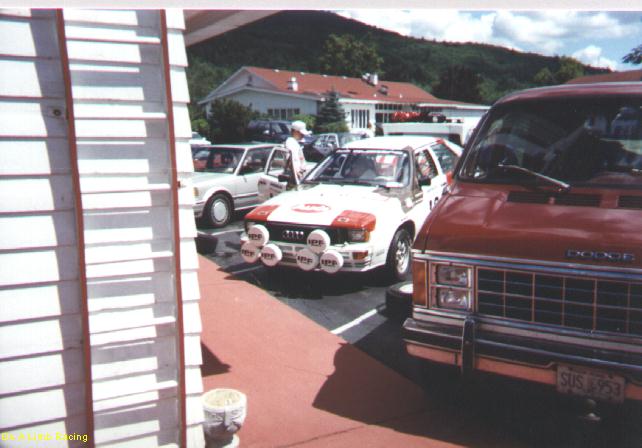 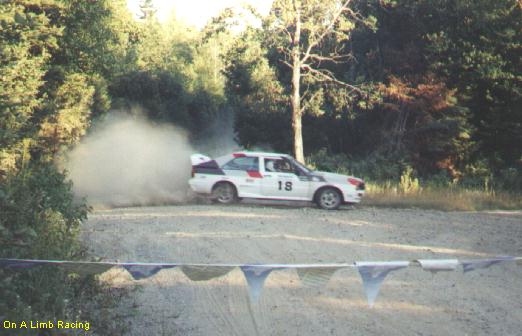 Mt. Washington Hill Climb Car.  20V converted. Notice the cut down firewall for the old 10V intake manifold.  This is a good example of Bruno getting Lehmann to make a 20V motor to keep the LWB A2 competitive.  Also note the S1 strut mounts which indicate that this A2 is fitted with S1 style magnesium struts.  Since Shokan has the 10V, I can only assume that this 20V is now owned by the Sprongl brothers. Mt. Washington Hill Climb.  Bruno's license plate "VW AUDI" is on this car.  This same plate was on my car when I bought it and Bruno asked me to mail it back to him!. :-)  This car, does not have A2 fenders, and I suspect its my chasis.  The rear oil sump and wing must have been removed prior to its sale.   If you look at the dash in this picture, its a low modified street dash like my car. 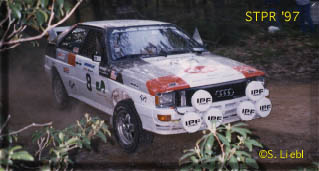 Unknown date Mt. Washington picture.  I believe this is Sprongl driving one of Bruno's cars on loan when the Sprongl's S2 had a dead motor.  Circa 2001 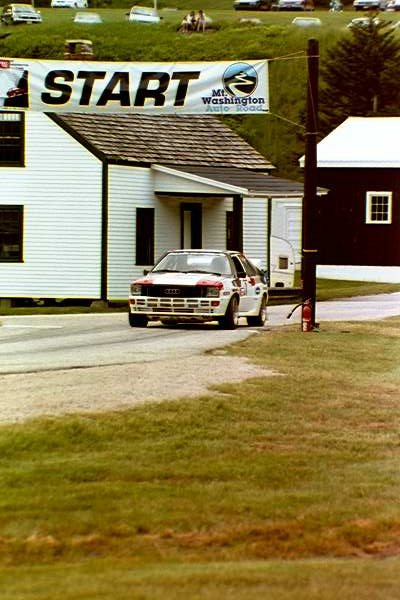 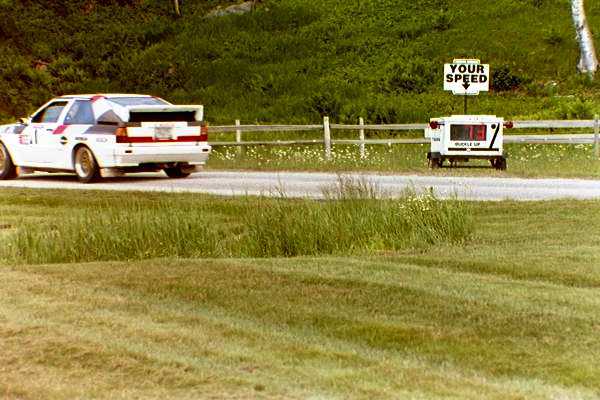 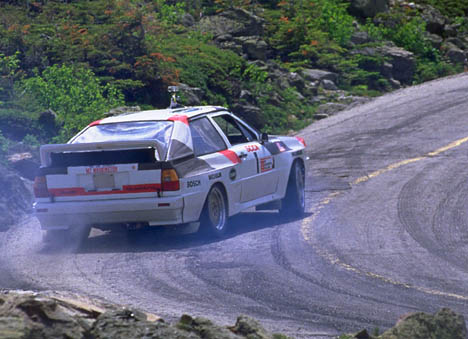 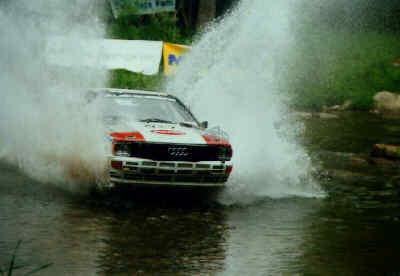 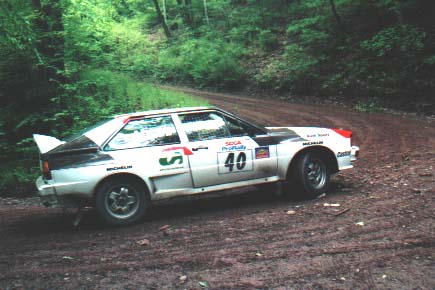 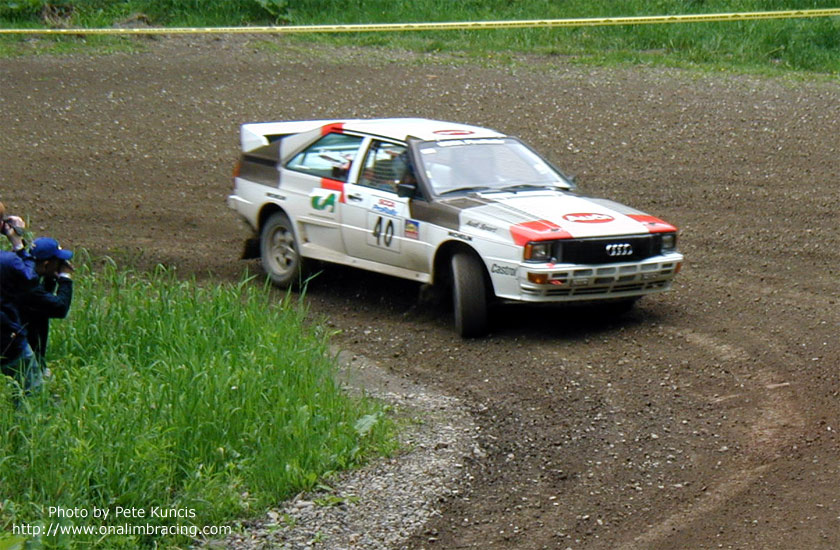 "Bruno's"  Look at the holes in the hood.  The pinstripping.  This is the 20V car that the Spongl's now own.  The wires for the rally lights seem to be taped off with ducttape.