Well, I did run a rallycross with Spokes a few days ago.  How did it go?   Shitty.

At the MJM event, the brake pedal went soft.  I thought it was bad fluid so I drained and bled the lines.   Pedal felt better, but still not 100% right.  My suspicions were confirmed when I was driving the car to the local rallycross and I had no front brakes.  Rears would lock up easily.  I was pulling into a gas station to fill up the tank before the event that morning and The rear tires completely locked up on the damp concrete and the car did a very dramatic stop from 20 mph.   It just slid about 10 feet. Everyone was looking over like what's that guys problem.   Pretty crazy.  So anyways,  In my infinite wisdom, John and I (mostly me) decided we might be able to do this if we Lock up the center differential.    Using a locked center has always been one of those great things about quattros.  The brakes work in unison creating massive braking power.   And if bychance something breaks on the brakes, the front system has help the rear and vise versa by locking up the driveline.    Not 100% good, but worth a try right?  We can all this way.    So anyways, long story cut short.  No.  That doesn't work for shit with only rear brakes even with a locked up center.   On asphalt straight line its okay, but trail braking on gravel or loose soil and its completely erratic.   So useless bit of free driving advice.  With rear brakes only if you tap the brakes, the back end goes completely insane loose.  And this is further compounded by any change in grip levels to the front tires.  Cause remember the front has an open differential so trail braking deep into a corner like a quattro and its like having one front brake caliper.  of course it flip flops between the sides.   The rear end will kick out the front end will typically dive in as the outside tire loads.  Imagine trying to drive around with only a rear handbrake.   Bottom line.... Undriveable.   Im amazed I only hit 3 cones.  And still did about a 60 second lap and that includes coming to a halt twice and having a discussion with John and whether to continue mid-course.   Anyways,  John jumped into a STI and did the best times of the day..   Bummer.

So, new or rebuilt brake cylinders.  The rally car uses Two AP racing Lockheed 13/16" CP2293.   CP2293 are US made, so guess what, the threads are all in English.  Another one of those quirkly Imperial threads on a German Car.  Some of the notable others are the Apex Joints, the AN hoses.   Well the brakes lines and systems are too.   3/8x24 threads on the outlet (standard brake nuts) and 7/16x20 on the inlet.  My car uses banjo bolts on the inlet and standard brake nuts on the outlet.  The hose is 3/16" standard steel lines which happens to conveniently be 4.75mm lines.  Cool huh?   All the line ends are bubble flared.    The reserviours are Girling like stock Audi units.   I use Motul 600 fluid which has a half life of about 6 months.   Now I will say that the brake nuts on my car were a strange creating using 3/8x24 male threads with a 11mm nut up top.   Same thing on the calipers.  Whereas standard brake nuts have the same 3/8x24 thread with a 7/16 or something other nut up top for tightening.   I can't find that weird metric/imperial combo nut so I had to use standard nuts for 3/16 hose.

Okay, brake master cylinders are rebuildable.  kits are about 25 dollars so its pretty reasonable really.   Removing the cylinder is super simple.  Little PB nutbuster to loosen things up.  Each master cylinder is bolted to an aluminum adapter plate on the firewall.   This reinforces the firewall as well as providing a nice mechanism for removal.  Honestly.  The bolts are using Nylock nuts.  But because you gotta have one guy on the engine side and one guy on the floorboard, its a two person job.  Seems like studs somewhere in the equation could make this a one person job.

Here is one of the old master cylinders.  Little bit of surface rust, cracks in the rubber boot.  Looks like they're due for a rebuild.  If you look closely there is an internal snap ring which olds the collar in there. 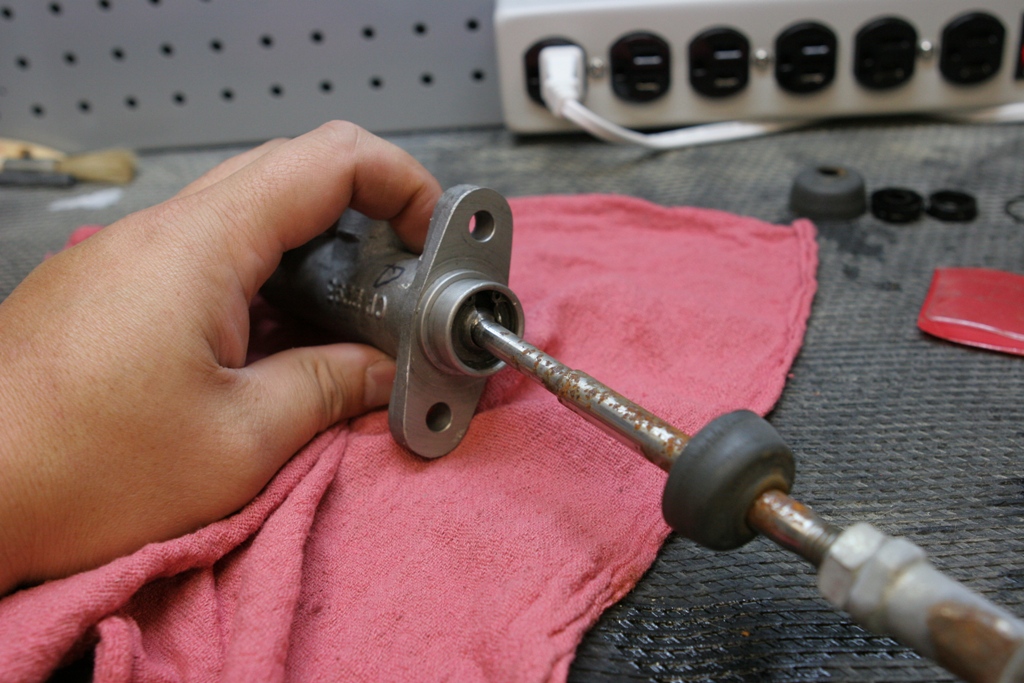 Remove the snap ring, and the collar comes out and so does the piston and spring. 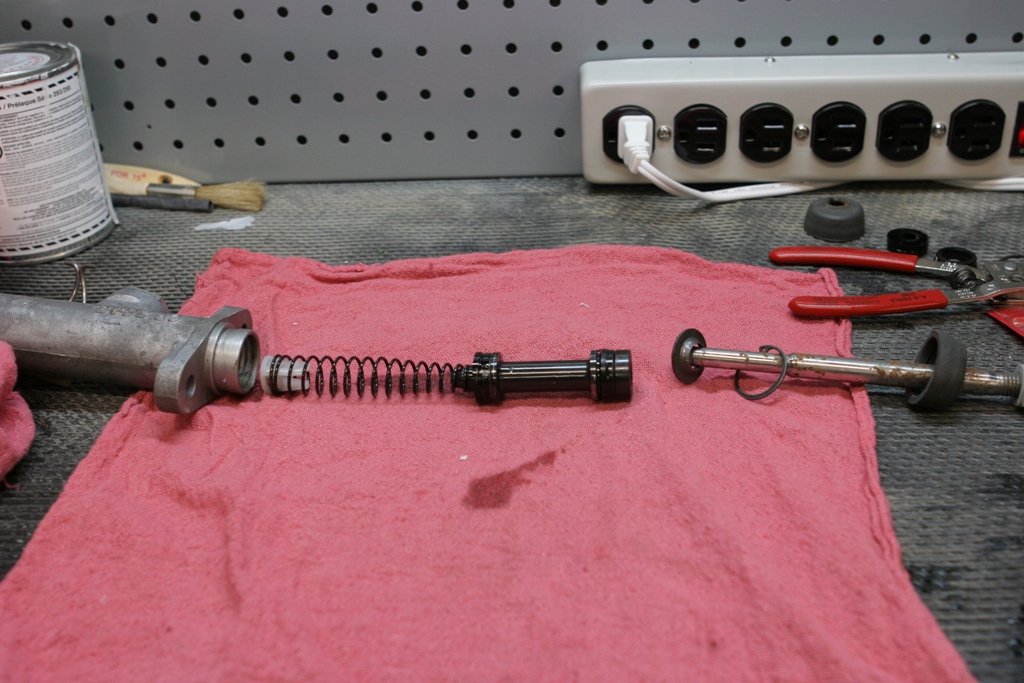 So there is the piston 2293 and the engraved 13/16 on the side meaning the piston diameter.  I went ahead and polished all the rust off the linkage and reassembled everything in the right order, also used some high quality grease specifically for this application to prelube the piston. 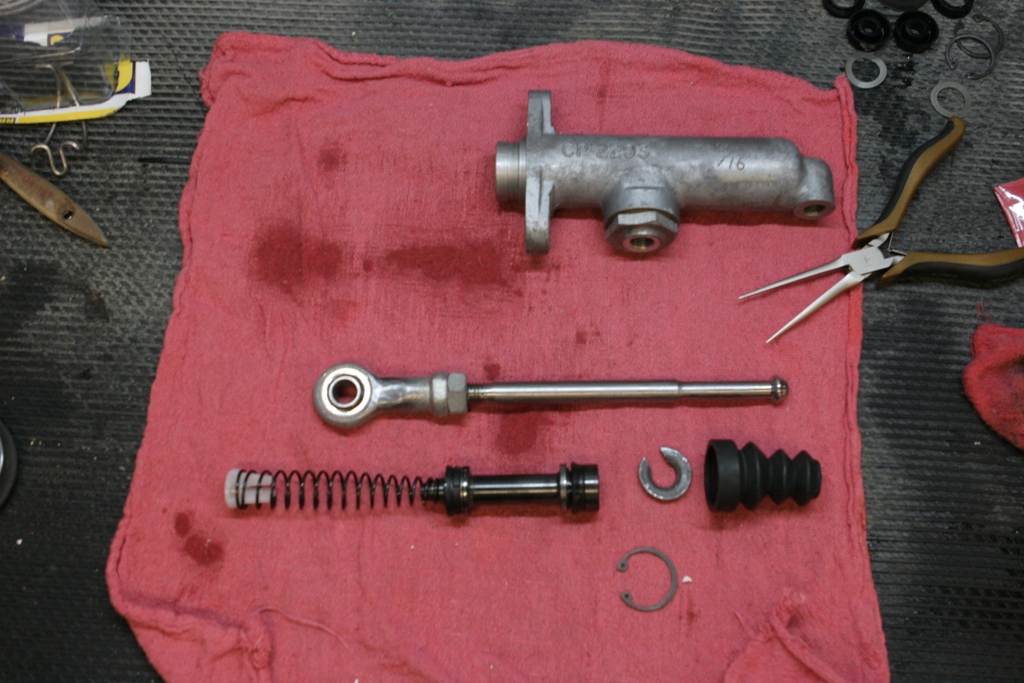 here are the reassembled master cylinders.  Overall a super simple job taking only a few minutes per cylinder. 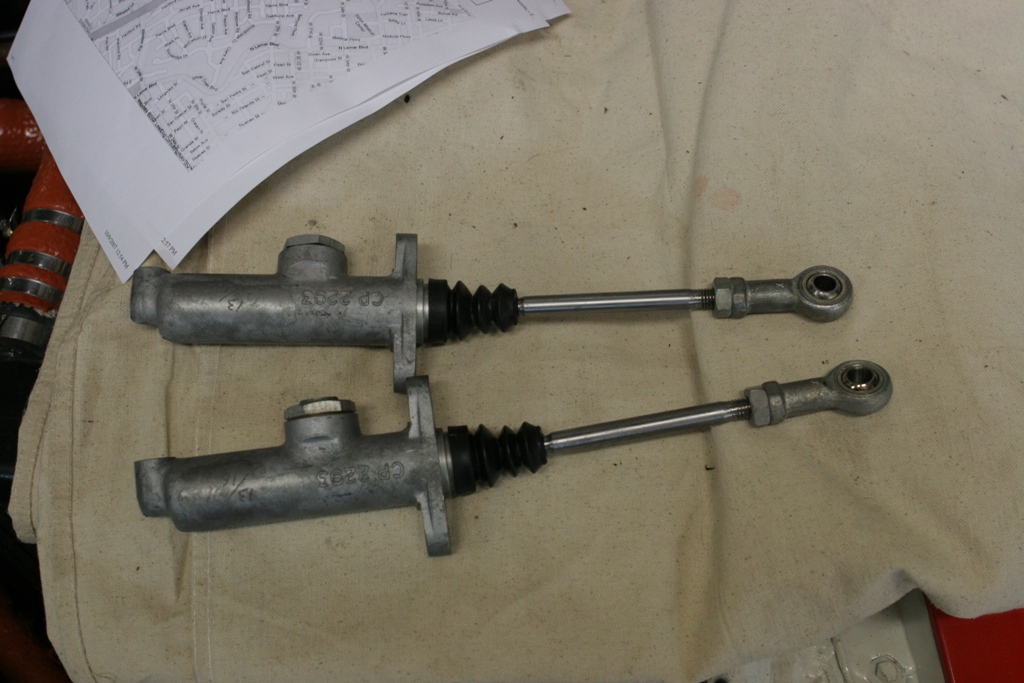 Linkage lengths were identical meaning no wild swings in brake bias.  Set to 50-50 pressure and then adjusted via the valve between the seats behind the shifter.  I suspect with the valve at 100% open the bias is 50-50 and then from there, as the valve is closed, the car produces more front  brake bias.  I will seek the perfect front brake bias at the track in a few weeks. 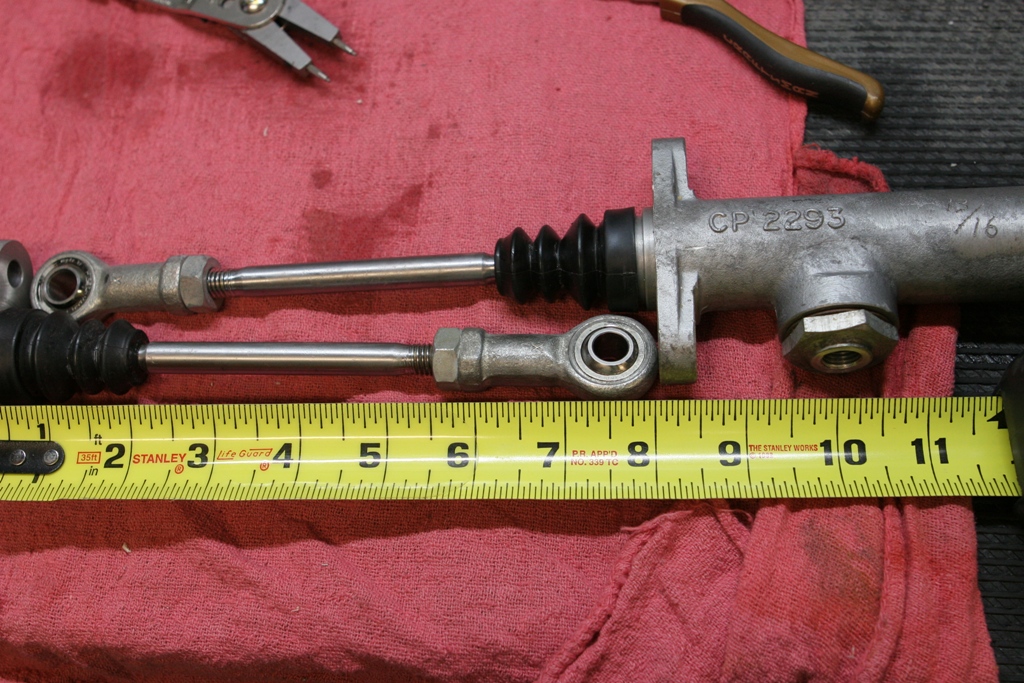 And finally, the new versus the old.  One day these cylinders will fail.  Lockheed doesn't make the 2293 casting anymore although you might be able to still find a few here or there if you look, but they have a superceeded part which is pretty much the same thing.  Its the 6093 and is also 13/16 and uses the same rebuild parts.  The only difference if the outlet end is on top rather than protruding from the end so its a bit more compact.  The 6093 also eliminates the plastic spacer that has to go on the end of the spring in the 2293 and that is pretty good as it could break and make a mess of things. 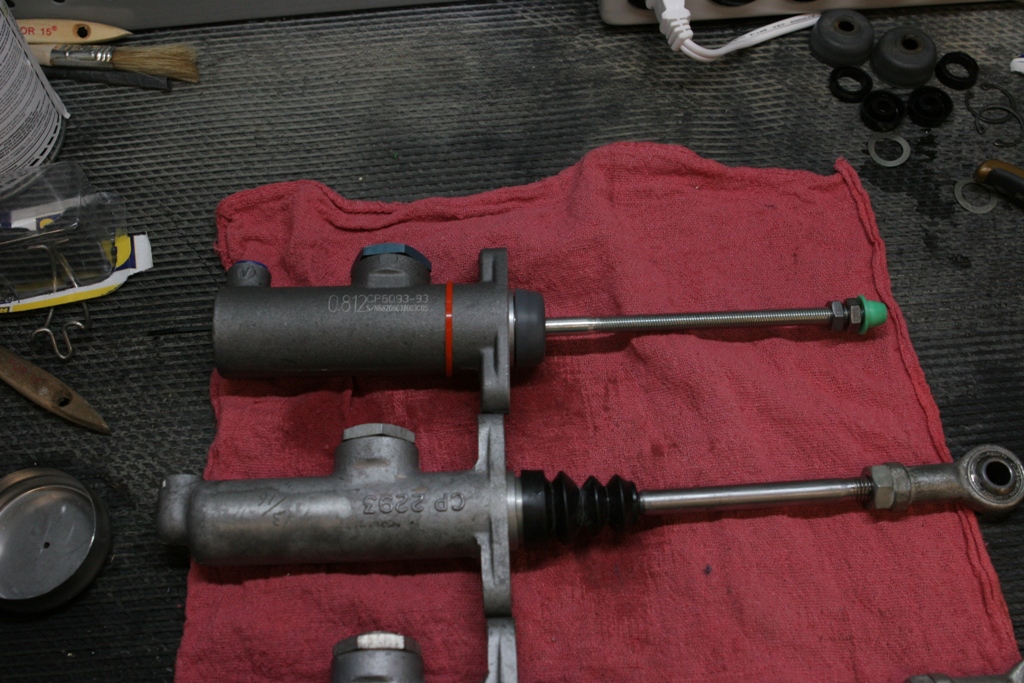