Here are some pictures of the progress made on the car in the last week.

This is the new 2.5" diameter pipe going into the intercooler.  The original 2" pipe was removed and this 1/16th thick 6061 mandrel bent piece is the start of the new U-pipe section from the turbo to the intercooler.  The Welds were done with a Miller Dynasty 200 DX TIG using 3/32 filler rod.  The clearances are close and we were worried that this enlarged pipe will not fit with the current endtank but it fits nicely.  The inside face of the pipe aligns perfectly with the inside face of the endtanks.  There is a smooth transition.  The oil cooler can be seen below the intercooler.  The front crossmember/bumper carries the weight of the coolers as well as the front engine mount.   Information on the crossmembers can be found here. 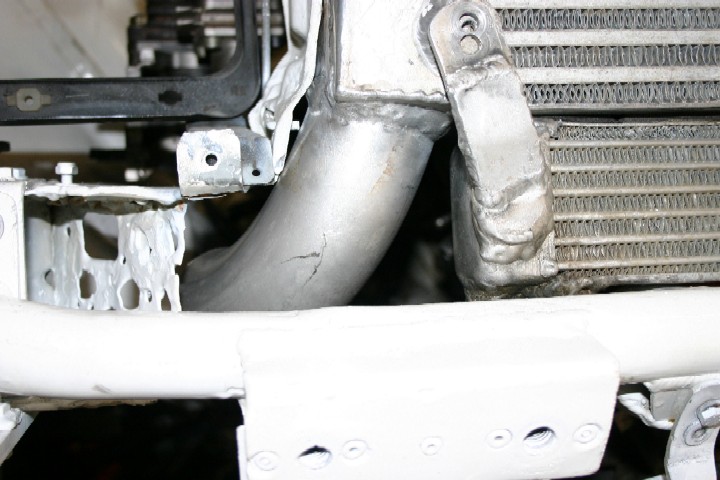 The intake manifold has been bolted back on the car.  Fuel rail is back on and we have started the layout for the wiring.  We started with the output side of the ECU which is the Injector wires and the coilpack wires.  The Ignition wires have been run from the coilpacks to the sparkplugs.  We sourced an original Audi ignition wire tube from a 1985 5000 Quattro.  It bolts up nicely to the Sport Quattro Cam Cover and aligns perfectly with the BERU connectors.  The Wires are from Kingsborne Wires.  Kingsborne also sells the Stock Beru connectors if you need them as well as any individual component needed to make custom spark plug wires. 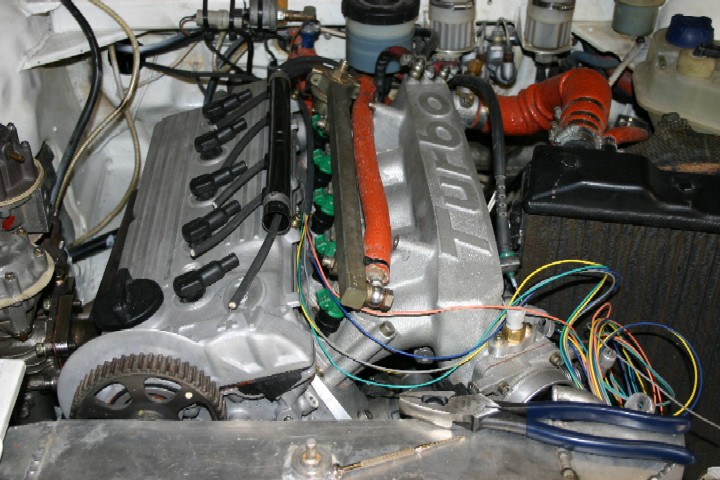 The bracket for the dash which holds the ECU and the three new gauges.  The bracket is a MIG welded steel frame which bolts to the underside of the dash with four M6 bolts and attaches back to the body with two bolts.  The ECU is mounted to the bracket with four rubber M6X1 studs, and can be removed from underneath for access to the wiring.  The bracket is also drilled with 4 nuts welded to the backside for attaching the faceplate. 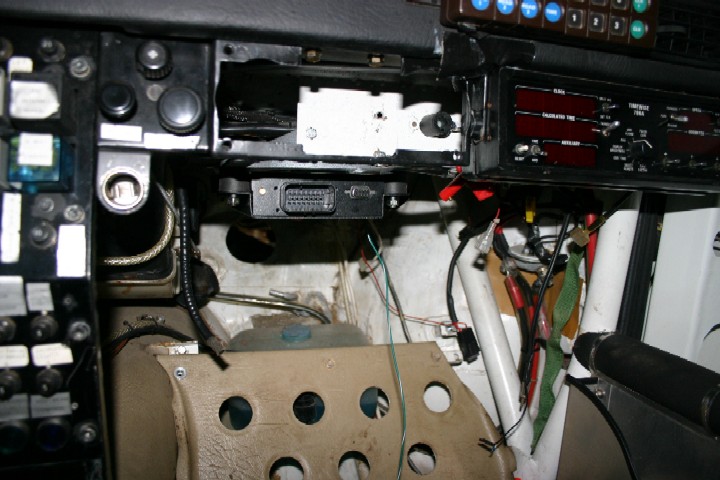 The faceplate is made of 14 Ga. Steel and is painted black.  The 3 gauges mount to the faceplate and are removable with the plate.  The plate is attached to the frame with four black M6X15 internal hex bolts.  The serial connection for the ECU is accessible underneath the dash. 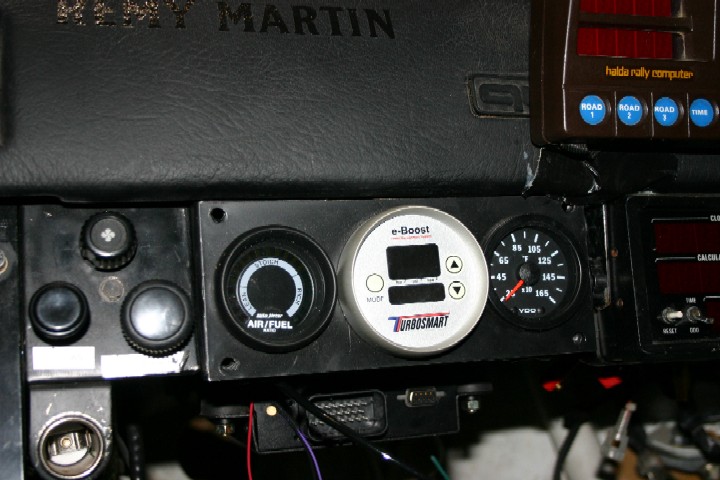 A bracket has been welded to the turbo.  This tension rod with turnbuckle and two clevises came with the car.  We will be reusing these brackets on the new U-pipe.   I'll try to have the U-pipe done this weekend. 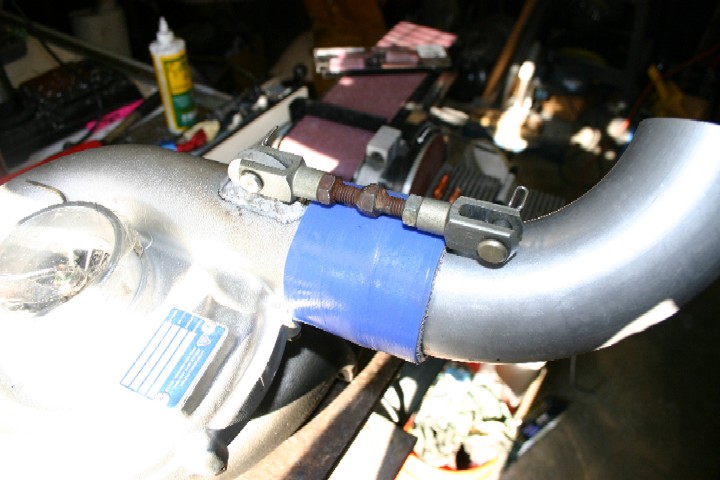 The completed downpipe.  Made from plain steel and painted with 1200F paint.  This is similar in construction to Audisport.  The exhaust is wrapped in fiberglass heatshielding and stainless steel safety wire.  The two bungs for the O2 and EGT can be seen just aft of the K27 turbo flange.  The wastegate flange is for the Porche wastegate. 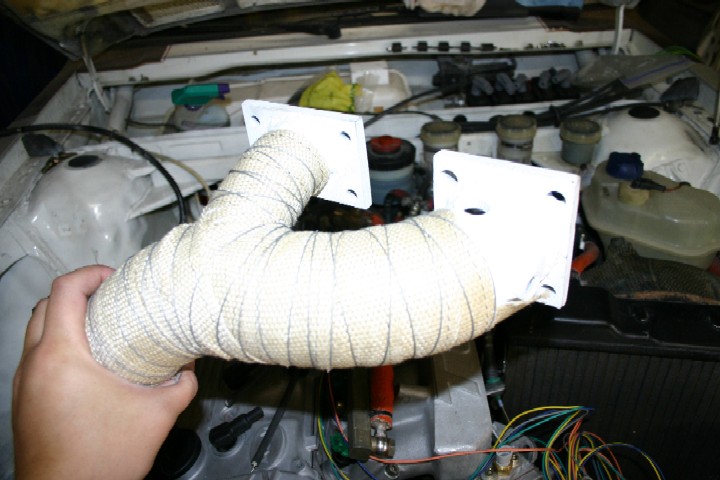 The coilpacks.  These  are mounted on the driver's side near the firewall.  They are affixed to an aluminum frame bolted to the chasis and suspended with M6X1 rubber studs.  These came from Javad for use in his 034 ECU. 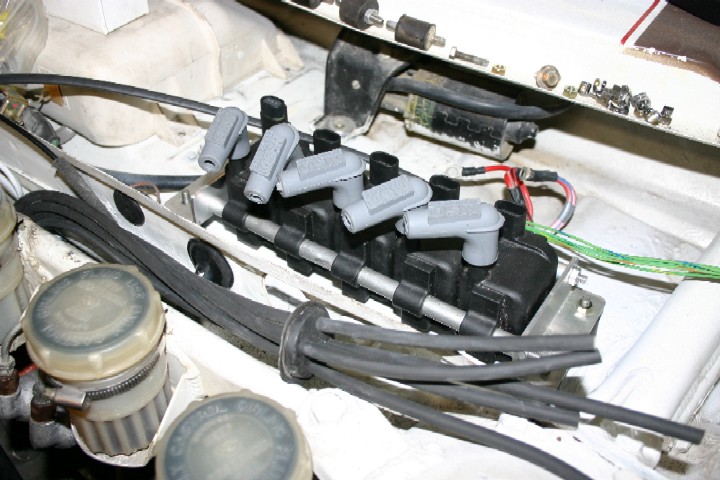 This is our solution to mounting a GM air temp sensor in the same location as the Bosch unit.  Since Javad's ECU uses a Standard GM Air temp sensor, this one is from a 1993 Buick, we had to adapt this to my intake manifold.  I didn't want to drill or modify the Lehmann unit in any way, so we used a cut down aluminum oil flange bracket.  This is one of the brackets that we had made for use on the Garret turbo. The bolt gauge was exactly the same.  All we had to do was reduce its height.  It was already drilled out for 3/8" NPT. 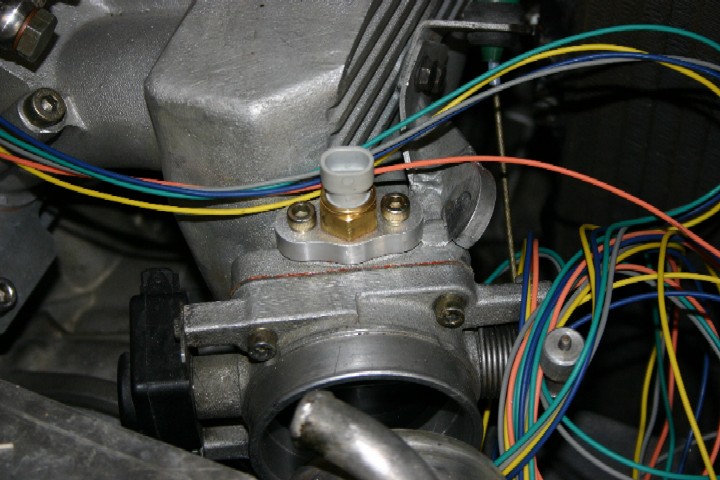 An extra picture of the exhaust manifold. 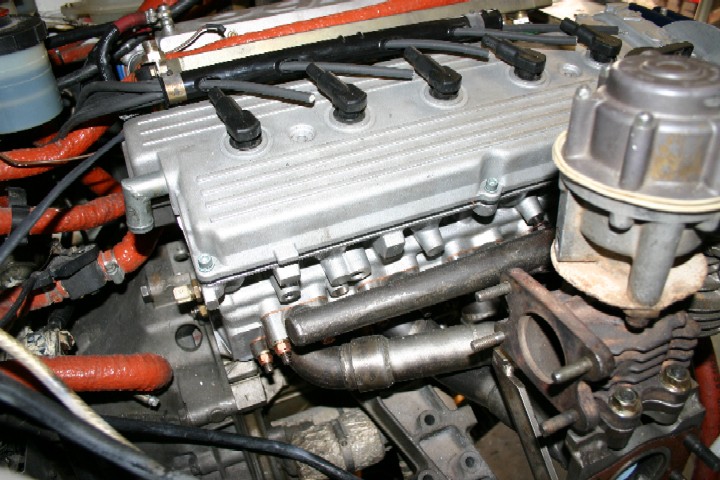 2nd shot of the exhaust manifold setup by request. 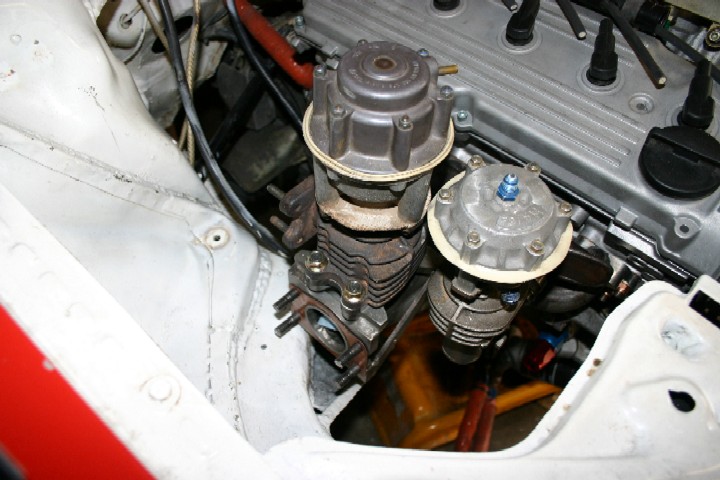 Here is how the dual master cylinder works.  There is a threaded rod going through the brake arm connected to two heim joints which then go upwards and forwards to the master cylinder.  Here is one side of the setup. 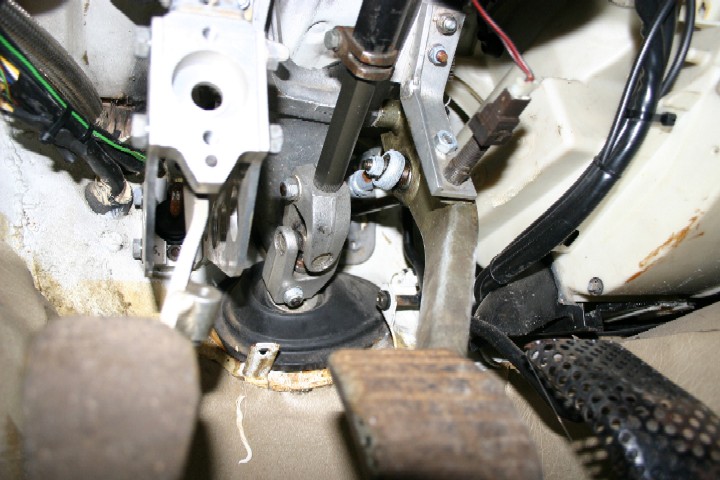 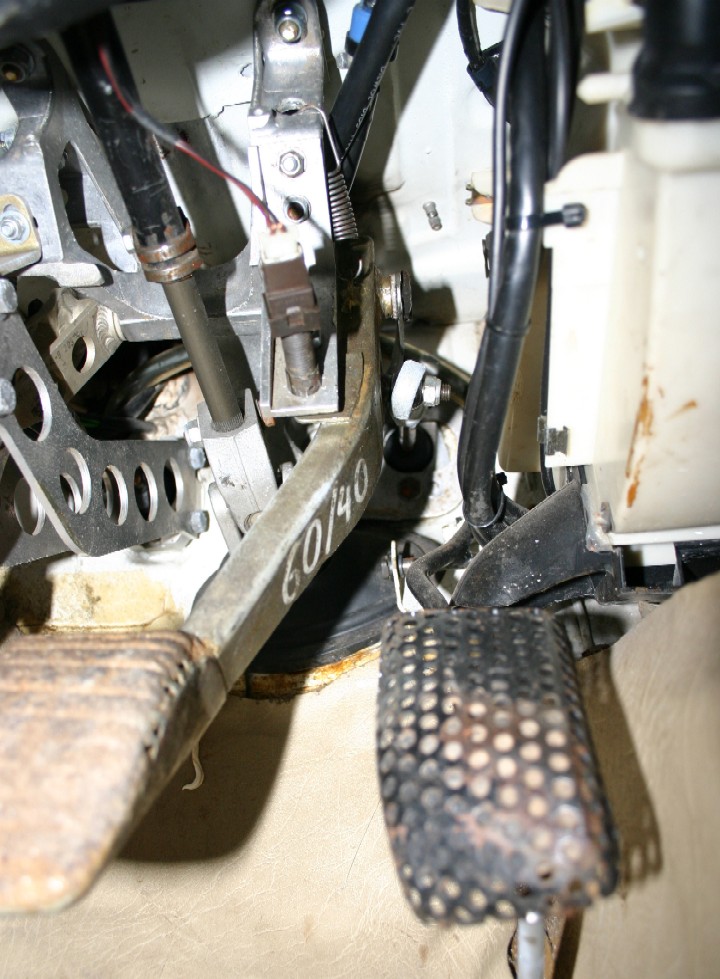 The shifter linkage on my car is stock 016.  The transmission is a Kluge 016 but the linkages are all stock until the shifter.  At that point it reaches this audisport short shifter.  The shifts are short and crisp. 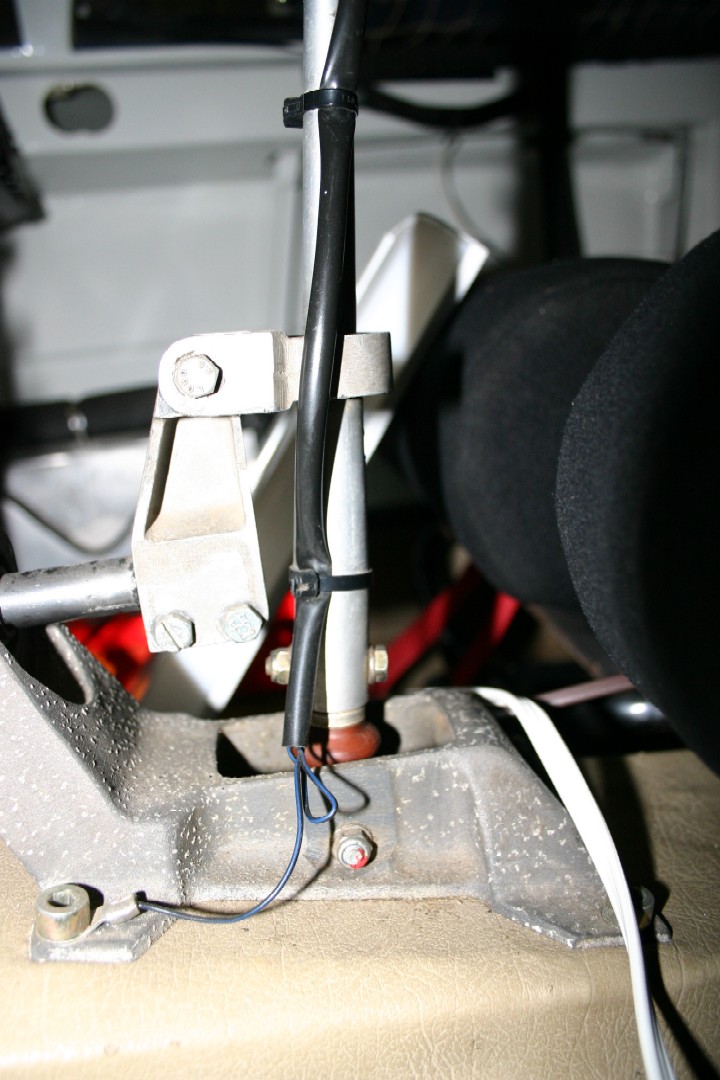 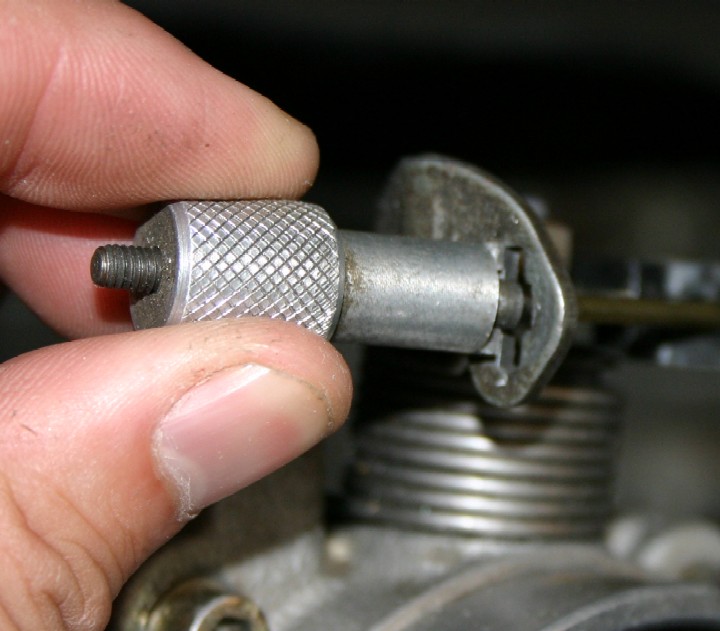